Believed to be unique, this Series II Super Six 16hp DHC was first registered in 1937 in Kent and was fitted with a Redfern tourer body by Maltby Coachbuilders, near Folkstone. Only 2 owners from new, the first being a titled gentleman, and now being sold following the recent death of the 2nd owner. 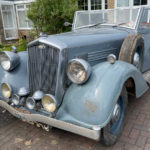 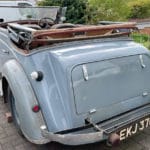 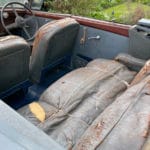 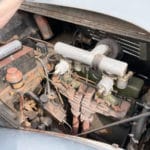 The car was fitted with an 18hp engine early on in its history when owned by the 1st owner, and which is documented in an old log book of the car. Apart from that, the car is totally genuine, original and complete. The hood is off the car, although the complete frame is still in position, however, the original hood is in the boot, ready for use as a pattern.

The car has not been started for around 20 years, but was running well prior to that. Everything on the car is original and intact, and the bodywork appears to be very solid and with all trim attached. The seats are unfortunately beyond repair and will require recovering.
Many bills and receipts are included, going right back to the original sale. The original drivers handbook and another Wolseley book are also included, as are a large amount of spares.

The car is for sale based on requiring a complete restoration, but this could be a relatively straightforward project, particularly as everything is present and unmolested. A very rare, genuine and probably unique Wolseley. 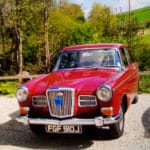 I purchased it in 2014, bought it to North Yorkshire and became its 3rd owner whereas the previous owners both lived in London.
Original red leather interiors match it’s red damask exterior. I had the bumpers rechromed and a new electronic distributor no points. The cars history, receipts, invoices and car magazines included. 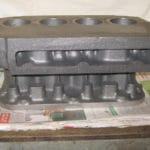 I have a few spare cylinder blocks for the pre-war Stellite. These are as cast , un-machined, new manufacture.
I have machined one and it is running fine in my Stellite.

A pair of genuine Mk1 wing flashes, never fitted and in perfect condition. One complete in original BMC box and including original fasteners. The other is unboxed and no fasteners.

Selling on behalf of an overseas member. A very rare opportunity to acquire a pair of NOS items. Will only sell as a pair.