The Wolseley Register staged a club stand in the Sedgemoor Hall at this popular annual Show.   Three halls and outside areas provided space for numerous car clubs and traders.  The classic car park allowed many visitors to the Show to display their own vehicles, including several Wolseley models.

The Wolseley Register was delighted to receive 2 awards at their stand where two very early exhibits and one later vehicle were presented: 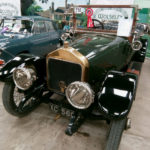 1919 Wolseley 16/20 C7 presented in dark green with green upholstery and canvas hood.  This large Edwardian 5-seat tourer is in good running order.  This was the first event the new Register member had brought the car to, and he was absolutely delighted to be awarded “Best Veteran/Vintage” exhibit at the Show.

1927 Wolseley 11/22 E4 is a 4 seater Deluxe model ordered through main agent Weybridge Automobiles Ltd, and delivered to Kingston Hill Motors in July 1927.  Apart from an apparent move to Buckinghamshire in 1937, its whereabouts are unknown until it was bought for £300 from a lockup in Egham in the 1970’s.   After renovation, it spent 3 decades or so mainly on static display in various car dealerships in Sunningdale (a stone’s throw from a 1925 E4 saloon), Hartley Wintney and Kew. 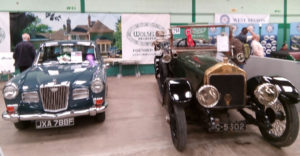 Both these early examples of the Wolseley marque attracted much attention over the weekend.

In complete contrast, a 1967 Wolseley 16/60 was presented by another local Register Member who purchased the car at auction 2 years ago.  It had been previously restored and was awarded “Best Family Saloon” at the 2017 Mendip Classic Run.  The owner was delighted to receive a “Highly Commended” recognition on this occasion. 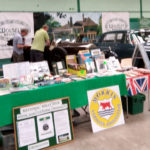 Many visitors and Register Members were welcomed to the club stand where technical advice and hospitality were offered alongside the popular Regalia stall.  Two new members and one previous member were enrolled with the Register over the weekend.

Thanks to all who visited the club stand and especially to the 3 exhibitors who put on such an interesting display.