Despite the title, our drive to display XC5602 on the Wolseley Register stand at the NEC Classic Motor Show was moderately trouble free.  We doubt that the Wolseley 16/20 had been back to Birmingham since it left the Adderley Park factory gates in 1919, so the trip seemed a fitting birthday tribute.  We chose a route from Wilsford, in deepest Wiltshire, largely following B-roads suited to a 35mph cruising speed, and were blessed with glorious sunshine as we meandered past various Cotswold landmarks.  Following the heavy rain earlier in the week – causing floods in various parts of the country – some of our lanes had turned into serious water splashes, and their muddy remains were evident on the car at the show.  The only serious mechanical issue was to do with the transmission brake, which is operated by the foot pedal; luckily the handbrake, acting on the rear wheel drums, is just as effective (i.e., not very).  The transmission brake saga started a few months ago, when inspection revealed the linings were non-existent, and the contracting shoes were wearing away the drum, which had also developed a serious crack.  We had only just got a new drum made and fitted, and centred (which is another story), and assembled with relined shoes, the day before the trip.  After a few miles the brake started to judder and smoke tremendously.  Investigation on arrival revealed that the linings had entirely worn/burnt away during the drive, and our current theory is that the linings were not suited for the high rubbing speeds of the prop brake.  Fortunately for us (but not the nice new drum), the brake worked quite nicely on the rivets during the return journey.  Talking of the return, against all advice, we drove home on the Sunday night.  The light traffic meant we could use A-roads (but we stuck to minor ones), and we rigged up a tailboard and flashing beacon to supplement the original CAV lighting, especially important for crawling up hills at 15-20mph.  All went well initially, with the reassuring 1200rpm throb of the Edwardian 3 litre side-valve never threatening to miss a beat.  Not having wipers, when the rain arrived at 11pm we opened the windscreen – not a problem.  However, the lights going out soon after was a problem.  It seems that the 100-year-old dynamo, although apparently churning out 12 amps throughout, wasn’t up to the job, and we hadn’t noticed the battery draining down to 8 volts (… as the well instrumented CAV switchbox helpfully indicated).  Fortunately we had a spare battery, and despite a concern that we might have a moisture-related short somewhere, it got us home.

Altogether a memorable way to celebrate an important birthday.  Each leg required about four and a half hours driving, with an extra couple of hours thrown in for the obligatory slap-up meal en route, so getting on for 7 hours end-to-end.  Where to next year? 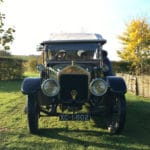 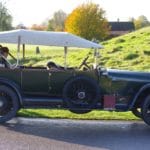 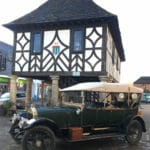 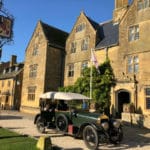 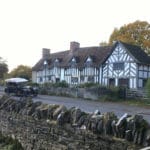 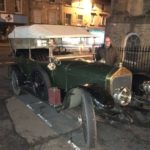 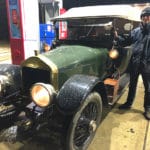 Andy pleased that the lights are working again! 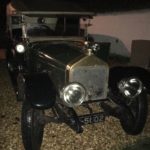 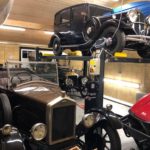 Safely back in Tim’s Wolseley commune

This model was produced from 1910 to 1920, and for a period before WW1 was one of the most popular quality British designed cars in the country.

Present owner: Tim since 2017. The car was originally registered in London, and spent some time in the USA before being re-imported to the UK in 1980.