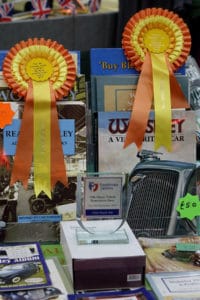 Wolseley Register Members were delighted to be awarded 3rd best Club Stand at this years show, which exhibited three very different examples of the marque in various stages of restoration in the Sedgemoor Hall at this popular two-day event: 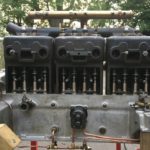 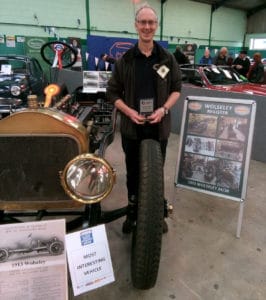 This is a substantial 5 litre, 6 cylinder Edwardian, originally weighing 2 tons with its Limousine Landaulet body (now lost).  It was dismantled many years ago, and reassembly started a year ago as reported in Wolseley World No. 198. The chassis was displayed, with the finished engine  re-fitted in time for the show.

This exhibit was justifiably awarded “Most Interesting Vehicle” at the Show! 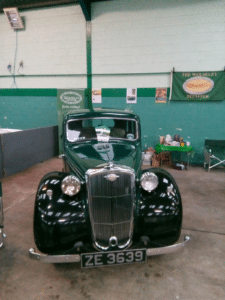 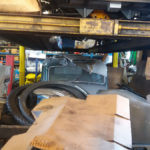 ‘Zebedee’ was purchased in 2018 having been a twice-abandoned project!! He had been fully restored in 1999 but then stood for the next twenty years under a ramp and covered in junk.

His new owner fell in love and bought him with the proceeds of her 1966 Triumph Herald. Everything that had been done in 1999 had either perished or seized up, and that means everything. When he arrived home on a trailer looking very sad he was found to be stuffed full of spares, along with a huge mouse nest and woodworm in the cab. 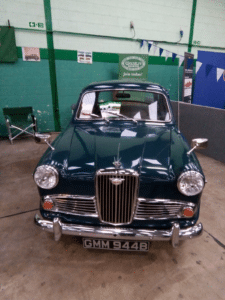 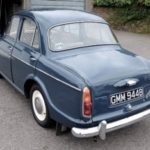 “Gemma” was purchased in September 2018 on the road with an MOT, having been an insurance write off in 2007 due to an interior fire but was returned to the road the same year.  She has had an interesting life and came with lots of history which appears to support the mileage reading of less than 50,000.  The Chassis and Engine numbers are original.

The car is quite sound with a current MOT and is being treated as a rolling restoration, so her condition changes from month to month.  The first job was to remove the custom wheels and steering wheel and replace with original type, having had the wheels blasted and powder coated. The interior has had some attention with the dash being re-veneered and lacquered and all the seats reupholstered.  A new clutch has been fitted and a recon slave cylinder.  Some modifications have been carried out: alternator, spin off oil filter and hazard lights fitted.

A slight leak from the radiator requires attention, however the next planned work is to repair the bodywork as required then move on to the engine bay.   It is intended to have a respray in the original Trafalgar Blue colour, as she is quite faded in places and currently about 5 different shades. “Gemma” will never be a show winner but already turns heads wherever she goes and has to be useable on a regular basis all year round. 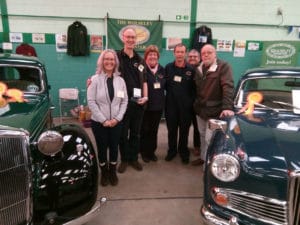 Register Members were on hand throughout the weekend to answer technical and membership enquiries and the full range of club merchandise was on sale.