Long Service Awards are presented to current members who first joined the Register at least 25; over 40 or even 50 years ago and who have been continuous members.  Those attaining 25 years membership receive a Silver Award and a Gold Award is presented to those who have reach the 40 year status.  We are now delighted to be able to recognise members who have been in the Register for an amazing 50 years!

These awards are a small but important way for the Register to recognise the greatly appreciated loyalty and support of long-standing members residing both in the UK and across the globe.

Awards have been made annually since 2011 when the first 25 were presented at that year’s National Rally.  The first 4 recipients of the Gold Award for attaining 40 years membership are pictured below:

The longest-standing member is Ray Burgess who joined the Register in 1968, just 4 years after it’s inception.  Ray was therefore the first member to attain 50 years continuous membership – well done Ray!  Ray was presented with a framed certificate at the 2018 National Rally and a profile of his membership was printed in the Rally Programme.  Three members who achieved 50 years membership in 2019 were profiled in Wolseley World; another  in 2020 and three more have been announced this year.

In addition, 5 Gold Awards and one Silver Award have been achieved this year. Wherever possible, these are presented to individuals during the year at Regional and National events to allow the committee to personally thanks every member who has demonstrated such commitment.    If necessary, awards are mailed out.

The full list of 2021 awardees was published in the May/June issue of Wolseley World.

A Gold award was presented at the Wolseley Register National Rally in August 2021: 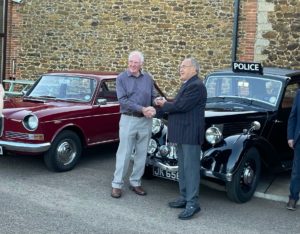 Awards made to date (including this year’s qualifying members) total 193 Silver,  41 Gold and 8 Platinum.  This represents approx. 1/3 of the current membership. Whilst new members continue to join us every week, it is heartening to know that so many have remained constant for more than a quarter of a century, and over half a century in some cases!

The furthest travelled to collect an award is Paul Billing who was presented with his Silver Award for 25 years membership at the 2016 North East Regional event at Newby Hall. This award was actually due in 2015 but New Zealand members Paul and Noeline were coming to the UK in 2016 and opted to collect the award in person!

The Youngest Member to have already attained 25 years Membership received his award at the Classic Motor Show at the NEC in November 2018:

Further awards will continue to be made as members attain 25, 40 or 50 years membership of the Register.  Any member who has not yet received an award but feels perhaps they should have done so, should contact the Membership Secretary for confirmation of their records.

Read about the very rare Wolseley Straight Eights, featuring one of our members' own cars, in the latest edition of “The Automobile” magazine ... See MoreSee Less
View on Facebook
· Share