After a three-year break, the Wolseley Register was one of 152 classic car clubs who were delighted to be back at the NEC for the 2022 Practical Classics Classic Car & Restoration Show, with Discovery.  Over 25,000 visitors attended across the 3 full open days to view over 1,000 display vehicles ranging from barn finds to concours standard and everything in between. 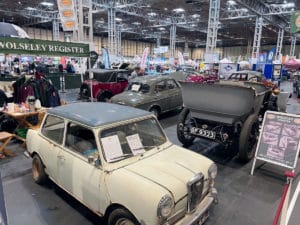 Four very different exhibits were on the Wolseley Register stand attracted much interest from the general public and club members: 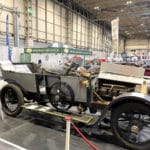 The oldest exhibit on the stand was a 1913 Vintage WOLSELEY 24/30 which has been painstakingly rebuilt by two very enthusiastic and determined Wolseley Register Members since acquiring a box of parts in 2018.  Originally weighing 2 tons with its Limousine Landaulet body (now lost), this substantial 6-cylinder Edwardian vehicle had been completely dismantled many years ago.  The original body was missing but most of a very suitable 1912 tourer body was found, and the missing scuttle and side panels are being remade.  Restoration work included rebuilding the 5 litre side-valve engine and the car was on the road by 2021 when it attended the club’s National Rally weekend. 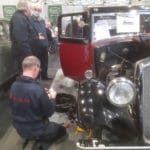 Across the Show weekend, work was undertaken on the club stand to the brakes of a 1932 WOLSELEY Hornet Occasional Four Coupe.  Having been laid up for a few years, the car will hopefully be back on the road later in 2022. 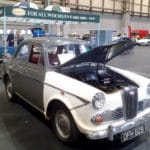 Between the two pre-war exhibits, a 1964 WOLSELEY 1500 Mk III was displayed.  This example of the most popular post-war model had been fully restored many years ago by two Register Members.  Having changed hands over recent years the car is now in need of some attention to the bodywork. 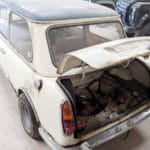 The “newest” exhibit was a 1968 WOLSELEY HORNET Mk III which had recently been acquired by the present owner.  Several areas requiring attention have now been identified. 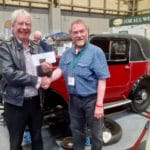 The owners of each vehicle were on hand during the weekend to discuss their restoration experiences and offer advice to those undertaking their own projects. Sales of club merchandise were brisk and membership enquiries were dealt with, and the first of the 2022 Long Membership Awards was presented by chairman Colin Briggs to member Bob Leyland during the Show for 40 years Membership of the Wolseley Register.

A number of Wolseleys were also exhibited on other club stands.

The Wolseley Register will be applying for space at the 2023 Practical Classics Classic Car & Restoration Show, with Discovery, which will take place from Friday 24 to Sunday 26 March 2023.

One of our members has written up his experience of our Spring Tour based at The Fat Lamb Hotel Ravenstonedale over Drive it Day. https://www.wolseleyregister.co.uk/2022-wolseley-registers-spring-tour-at-the-fat-lamb/ Perhaps you should consider joining us next year? ... See MoreSee Less
View on Facebook
· Share