Frederick York Wolseley, the founder of Wolseley Cars, is buried at:
Beckenham Crematorium and Cemetery
Elmers End Road
Beckenham
Kent
BR3 4TD.
The cemetery is open from November to March between 09.00 and 16.45, and from
April to November between 09.00 – 18.30. 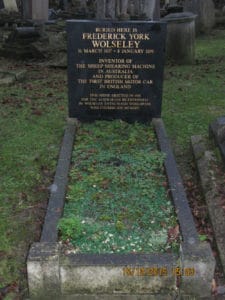 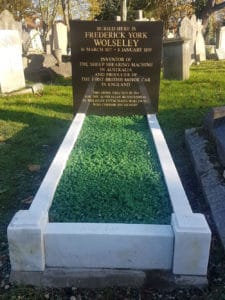 The grave can be found in Area 5, number U3, which is in the Victorian section of the cemetery, and which unfortunately is in an unbelievably bad and neglected state. Many headstones have fallen, there is land upheaval and many slabs are partly excavated below, possibly the result of the actions of foxes over the years. The area can be very muddy in bad weather!

However, the Wolseley Register paid the cemetry to restore Wolseley’s grave in 2017, as can be seen in the photograph above, and which should hopefully now last for many more years to come.

In addition to F W Wolseley, the following particular notables are also buried in the cemetery which might be of interest to military historians:
Frank Bourne – Last survivor of Rorke’s Drift;
George Evans – VC;
Also, W G Grace, Thomas Crapper and William Walker (the diver who spent five years shoring up the foundations of Winchester Cathedral, working in complete darkness).

The Wolseley Register helps to maintain the grave, and we are indebted to members such as Alan Simmonds who visit the cemetry periodically to keep it tidy. 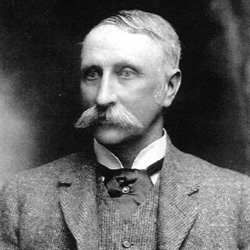