A group of Wolseley Register members enjoyed a wonderful weekend near Llandovery in Wales. Being close to the Brecon Beacons the countryside was truly beautiful and it was the time of year when all the bluebells were at their best. Most arrived at Llanerchindda Farm on the Friday afternoon but the Smits had arrived the day before. They had travelled in their immaculate 6/90 the 550 miles from their home in the Netherlands in one day interspersed only by a short train journey under the English Channel. What a splendid effort that was! Unfortunately Brian and Jenny Thomas made it as far as Cardiff before a gearbox problem curtailed their Wolseley journey. Peter and Mike Woods had broken their journey from London by an overnight stay in Cheltenham but their Wolseley which shared the same year of birth as Peter made the journey without a hitch. This gave credence to the slogan ‘Buy Wiseley buy Wolseley’. Peter was offered the luxury of garage accommodation for his cherished Wolseley by our hosts. Charles Sansom made a dramatic entrance by leaving a trail of oil along the car park but after a top up what problem there was went away. I was certainly envious by the extra equipment fitted to his car, Certainly a bell and a prominent ‘Police’ sign on the roof would be very useful in clearing the road of unwanted weekend drivers who make ‘ making suitable progress’ difficult.

We were welcomed on the first afternoon by afternoon tea and a Pimms reception before dinner.

Saturday started by the customary photoshoot in the car park where it was ensured that the ‘other makes’ were parked at the back making the participating Wolseleys the stars of the show!

With the custom made rally plates affixed to the front of our cars and armed with our detailed route instruction book and OS map all supplied by our hosts at Llanerchindda Farm we all set off on our first day’s adventure which took us to the Elan valley and reservoirs, Devils Bridge, Tregaron and the Llyn Brianne Reservoir –a distance of some 95 miles.

Most of us assembled for lunch at the Elan Valley Visitor Centre. We had passed through Elan Village which was built as part of the Elan Valley Reservoir scheme as a model village in the Arts and Crafts style  to the designs of Herbert Tudor Buckland.

The reservoirs which were built in the late C19th were used to supply Birmingham in a way that relied solely on gravity. A remarkable piece of Victorian engineering! 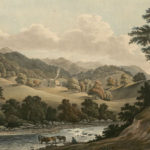 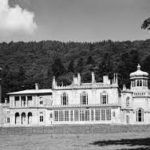 We continued on our way to Devils Bridge passing on the way past the Hafod Estate. Between 1790 and 1810 Colonel Thomas Johnes tamed the wild Welsh countryside to form a showpiece park in the Picturesque style of landscape gardening whose leading exponents at the time were William Sawrey Gilpin and Richard Paine Knight. Between 1800 and 1810 the park won many prestigious awards making it one of the most important ‘Picturesque’ parks in the country. In 1833 the estate and house was purchased by the 4th Duke of Newcastle who, obviously inspired by Hafod, engaged the services of the aforementioned landscape architects in the development of the Park and Pleasure Grounds at his main Seat of Clumber Park in Nottinghamshire. Unfortunately after the house was demolished in the late 1950’s some of the park was planted up by the Forestry Commission’ but now the park and walks are being restored.

Our journey continued, past the Old Masonry Arch built in 1810 by Thomas Johnes to mark the Golden Jubilee of George III, to Devils Bridge where the opportunity was taken by some to indulge in an ice cream. The more energetic among us took the steps down to see the waterfalls and Punchbowl. This enabled a better view of the three bridges making up the Devils Bridge to be enjoyed. 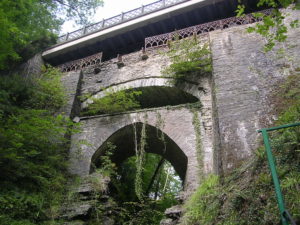 The first bridge is a medieval bridge and above that a second bridge was built in 1753 when the first bridge was thought to be unstable. This was in turn was strengthened in 1777 and 1810. Above that is an iron bridge built in 1901 which eliminated the slope of the roadway. 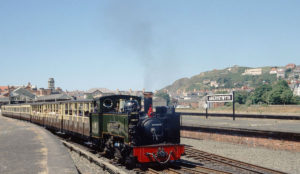 Sadly time did not permit us to ride on the narrow gauge steam Vale of Rheidol Railway which runs from Devils Bridge to the coastal town of Aberystwyth. 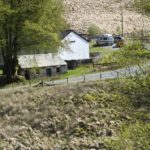 From Devils Bridge we had the advantage of a local Ernest Jones to lead the way and to tell us about one or two things along the way. He told us about the elephant buried in the gardens of The Talbot Hotel in Tregaron and we stopped near the remotest chapel in Wales. The next section of the route had been improved through a project Ernest’s father had been actively involved in.

From there we took the Abergwesyn (Mountain Road) to the Llyn Brianne Resevoir. Work started in the construction of the reservoir in the late 1960’s by Wimpey Construction. The dam is the UK’s tallest standing at 300 ft and is the world’s largest clay core dam. Despite being man made the views across the reservoir are magnificent. 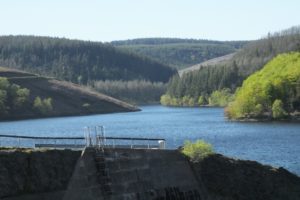 We concluded  the first day’s tour by retuning to Llanerchindda Farm in time for afternoon tea just as they were thinking of sending out search parties!! The day concluded with a natter and an excellent dinner.

Day two’s route tooks us through the Brechfa Forest, The Towy Valley, The National Botanic Garden of Wales and the Brynamen Mountain Road a toal of 85 miles.

The scenery was as expected superb. During the 1930’s Great Depression, unemployed men were set to work by the Forestry Commission in preparing the land, building tracks and planting trees to form what is now the Brechfa Forest. We arrived at The Nationa; Botanic Gardens of Wales in time for refreshments. Our hosts had organised special vehicular access so that we were able to park up in the Millennial Square where our cars formed a fine display attracting a lot of attention from the other vsitors.

The gardens contained a double walled garden and a domed greenhouse with the world’s largest single span housing tropical plants.The Gardens are built on the site of the former Middleton Hall estate. The Middletons in the C16th century were founders of The East India Company and lived at Middleton Hall until 1776 after which the estate was sold to Sir William Paxton. Like the Middletons Paxton’s wealth had come from his involvement with the East India Company. He set about building a new house to the designs of Samuel Pepys Cockerell in the Palladian style. This was judged to be ‘one of the most splendid mansions in south Wales’  Sadly the main house was burnt down in 1931 and what survives today is the substantial servants’ wing (now known as Principality House’, the double walled gardens, its Peach House, Ice House and Stable block.

After tea we were ably led by Ernest Jones and stopped to walk up to Paxton’s Tower erected as a folly in honour of Lord Nelson. The tower is 36 feet high with a turret at each corner. On the first floor is a banqueting room accessed by a spiral staircase in one of the turrets. Great views across the Towy valley could be enjoyed.

We then followed the Towy valley and stopped outside the former post office in Bethlehem. It was particularly busy at Christmastime when people would send their cards there to be stamped with a Bethlehem post mark.

Most of the party took the option to go on the Brynammen Mountain Road, a road much favoured by the presenters of Top Gear and judged to be one of the best drives in Wales. After waiting at the summit near an ice cream van to savour the views we made the descent and returned back to Llanerchindda Farm for afternoon tea, dinner and bed. 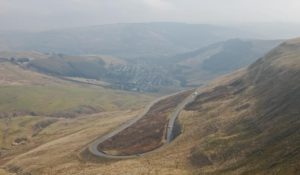 After breakfast we bade our farewells and journeyed home with the exception of John and Yvonne Smits who had elected to stay on another day and go on another run to the coast near Newquay. When he arrived home he reported that he had done 1,410 miles over the course of the weekend. This must make him a strong contender in the competition to win the John Brindley Award.

All the participants thoroughly enjoyed the touring weekend and our thanks must go to the Hadley family of Llanerchindda Farm for making us so welcome and looking after us so well. Everything we could have wanted was provided and the attention to detail in anything we received was awe inspiring.