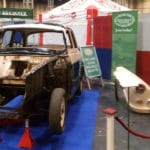 Having been off the road since 1991, this 1958 1500 Mk I was acquired by Graham Ryder, Deputy Chairman of the Wolseley Register at the end of 2018.  The car was exhibited at the 2019 Practical Classics Restoration Show where work was undertaken consisting of the rebuilding of the front torsion bar suspension. The car was then stripped down and work undertaken included a full brake replacement; significant repair to front wings and front panel; replacement sills and suspension rebuild.

Graham offered the 1500 to enable the Wolseley Register to join the Classic Car Loan Project which is primarily aimed at younger enthusiasts (minimum age 25) or people new to the hobby who have never previously owned a classic vehicle. The project has grown since its inception in 2017 and the 1500 became one of twenty cars put forward for 2020.

In late 2019, Warren Grove read about the Classic Car Loan Project in the Practical Classics Magazine and made his application.  Having met the scheme criteria, a meeting was held with members of the Wolseley Register committee in January 2020.  This was Warren’s first encounter with a Wolseley 1500, as Graham arrived in a working Mk III model – one he had prepared sometime earlier! 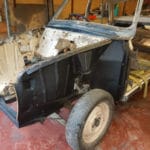 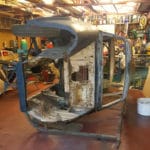 Warren’s first meeting with the loan car Wolseley was a view of it on its side, on a rollover frame in Graham’s garage workshop.  By this point Graham had performed many hours of labour, the car being completely stripped and metalwork and welding mostly finished.  Warren was delighted to be able to help by undertaking some panel preparation, while Graham continued finishing the new sills.

The car took shape over the next few weeks, then one Friday afternoon the car was turned back onto its wheels and Warren finally saw it upright.  By mid-February the panel preparation was complete and the 1500 was dispatched to the paint shop for a full body respray. 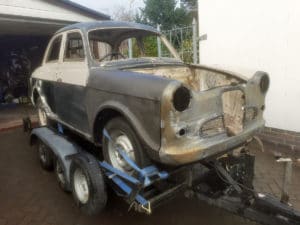 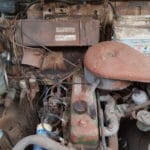 Graham and Warren continued to work together on the engine, slowly dismantling it from the head to the crank.  Everything looked pretty good and was set aside to evaluate.  While Graham set to work on the engine, Warren helped grind the valves into the head, after which the motor was assembled and given a lick of green paint. The engine was fitted into another project car to set it up to run while waiting for the paintwork to be completed on the loan car.  After initial starting problems and the provision of a new battery, the engine was running in preparation for reinstalling.

At this point the coronavirus lockdown halted joint working but Warren had the very tired wooden dashboard at his home along with the door cappings and screen pillar covers.  He initially lightly prepared the old surface to refurbish, however once this was varnished it looked worse than before, as it highlighted all of the imperfections of the old wood.  So, over a couple of weekends it was stripped back and started again from scratch. 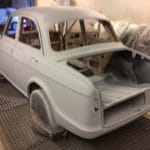 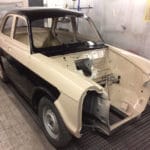 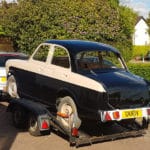 During lockdown the paint shop was fortunately able to proceed with the final preparations prior to painting and some pictures arrived with the car in primer.  After another week the photos came thick and fast with the final transformation seemingly only taking a few hours.  The finished shell finally returned on 16 May so work could begin on reassembling all the parts that are stored in many boxes. 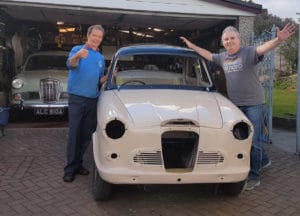 Once the car is fully reassembled, a handover will be arranged and Warren will keep the car for a full 12 months, during which time classic car events will hopefully recommence.  Graham will continue to support and mentor Warren, who is now a full member of the Wolseley Register.  Warren and his family are looking forward to meeting other club members and joining in local and national activities.

The Classic Car Loan Project (CCLP) is the brainchild of long-time car enthusiast Bob Wilkinson who said, “I am delighted to have a Wolseley 1500 in the project thanks to the generosity of the Wolseley Register. I appreciate the hard work which has gone into the restoration to make this a delightful car again. My late father’s last car, which I enjoyed driving, was a 1958 Wolseley 1500 so this will bring back many happy memories.”

Find out more about the CCLP and follow all the cars at www.classiccarloanproject.co.uk

There has been a lot of progress over recent weeks:

The new disc brake conversion, which uses Ford Escort xr3i callipers was fitted along with the rear axle and telescopic shock absorbers. 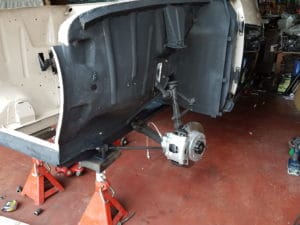 The new wiring loom went into place, along with new servo and brake pipes.  These were all individually made by Graham and Warren, using Graham’s pipe bender to get accurate bends for a really great finish. 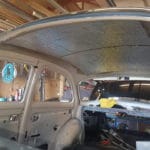 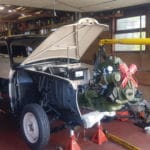 Audio sound deadening was also fitted on all the inside panels. The bellhousing and gearbox were given a final coat of paint before reinstalling the engine back into the car. 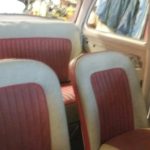 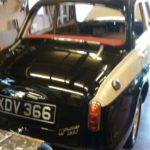 New correct fasteners for the propshaft were sourced before refitting it. The seats and rear number plate were back in place by late June.

The wheels were painted in champagne beige to match the body, then fitted with new tyres and look fantastic. 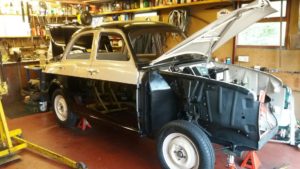 Recent progress has included fitting the front panel; wiring in the lights and fastening the side trims with handmade stainless steel M4 nuts and bolts, having shaped the heads to slide into the stainless steel strips.  The strips are spaced away from the body using a closed cell foam pad to allow drainage – this wasn’t too much work – only 60 bolts!!  The wind-up window weather strips are the current focus of attention. 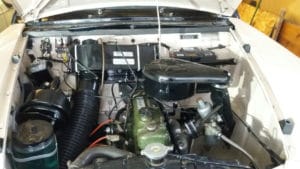 The engine bay is now almost complete with just a problem with the dynamo circuit still to be resolved.

The final stage of the restoration will include fitting the carpets and the rest of the interior trim. 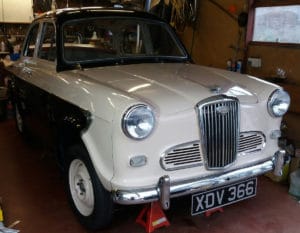 The car is now nearing completion with rear screen, seat belts and carpet having recently been fitted and an MOT has now been granted. 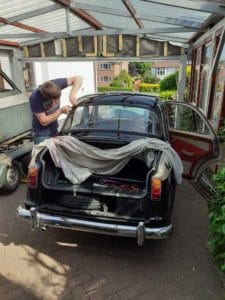 The car will be officially handed over to Warren at the BMC & Leyland Show at the British Motor Museum on Sunday 11 July.

The handover finally took place on Sunday 11 July on the Wolseley Register stand at the BMC and Leyland Show at the British Motor Museum, Gaydon.    Several Wolseley Register Members were on hand to meet Warren and cheer him on as he received the keys from Graham Ryder, watched by Bob Wilkinson, Project Manager and Peter Seaword.  Peter is the club’s Historian and he fully supported the Register’s participation in the project. He liaised with Bob Wilkinson, led the interview panel, and encouraged Graham throughout the restoration.  Bob was delighted to be present at the handover and gave some background information about the Project to the audience.

The finishing details have been quite time-consuming, but the car is now complete and MOT’d. Warren is really pleased to finally have custody of the car for a full 12 months. Graham will continue to provide support and mentorship to Warren, who hopes to attend many club events to meet more Wolseley Register members. 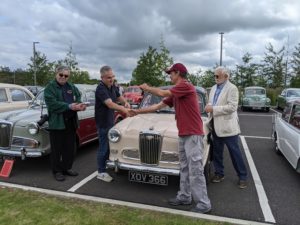 Graham and Warren made a return visit to the British Motor Museum with the Loan Car and another Wolsley 1500 for the Footman James Coffee and Chrome event on Sunday 17 October: 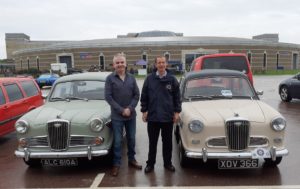